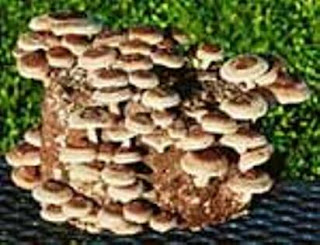 I recently spent some time speaking with the world's leading mycologist (mushroom expert), Paul Stamets, at the Green Festival in San Francisco. We had a wonderful conversation about mushrooms and bioremediation, biomimicry and mushrooms used for healing various medical conditions. He was kind enough to give me a gourmet Shitake mushroom mycelium kit which was part of his booth just like the one in the picture on this blog.

In a recent magazine article on Paul's work, he was quoted on the intelligence of the mushroom mycelium (the net of cells which is the "root" of mushroom of which the fruit is mushrooms as we know them.)

He states "I believe that the mycelium operates at a level of complexity that exceeds the computational power of our most advanced supercomputers, because these externalized neurological nets sense any impression on them, from footsteps to falling tree branches, they could relay enormous amounts of data regarding the movements of all organisms through the landscape."

In our conversation I shared with him my views on the necessity that we humans learn from the blueprint of how organisms organize and communicate.
Specifically I stated we are to restore the telepathic pathways of our group mind to organize ourselves similar to that of the mycelium of mushroom to reestablish a more effective way to communicate and share evolutionary consciousness coursing through the human mind.

Joanna Macy has also thought along similar lines with respect to the potential for global telepathy to heal our relationship with Nature. She discussed these ideas in an article that she wrote in conjunction with Andrew Beath's book "Consciousness In Action"

"The Birth of a New Planetary Consciousness”

“It could well be that our work now is to grow a new planetary consciousness. Carl Jung said there’s no birth of consciousness without pain. We are discovering that we are the sensory organs of our living planet, and that discovery involves pain. All of a sudden we realize that we care, that our hearts are breaking over people who aren’t even born yet. This is truly a noble thing. Over twenty years of doing this work I have found that people would rather hurt and feel connected than be anesthetized and feel isolated. “

“In terms of living systems theory, at every level of life’s self-organizing there is subjectivity. The brains of higher mammals – at our own level of subjectivity and consciousness – are the most complex objects in the known universe: one hundred billion neurons, all highly differentiated, with trillions of synaptic connections. This internal complexity evolved thanks to choice-making. This is still where we make conscious choices – right here between our ears – separately. But given our current global crisis, individual decision-making may be too isolated and too slow to stop the destruction. What could save us is if we start thinking and intending together – as interconnected whole. And fortunately, this is beginning to happen.”

“It’s as if we’re neurons in a big brain, which is itself starting to think. It’s like we’re being ‘thought through.’ I think that people are having that experience where they finish each other’s sentences or come up with the same ideas. We tend to refer to clairvoyant experiences in terms of the occult, like channeling, as if it’s somebody “out there” who’s channeling through me. But from the systems perspective we don’t need that kind of explanation. It's all emerging synergistically from our interactions.”

“This ‘mind sharing’ is, I believe, a natural function of our experiencing a common danger to our survival. The danger is not simply to Joanna or to Andrew or to John but to the whole Earth community. We are capable now of identifying with the planet as a whole. We start by identifying with families and countries, and then with humans as a species, then we move right out and identify with other species. I see this happening with people from all walks of life, regardless of location and background."

There are parallels I have also been enjoying in the online book by Robert Lorenz, PhD called "The Collapsing Tower - The Birth Pangs of Post-Ego Civilization" On the topic of restoring our connectedness with ourselves, eachother and all species on Mother Earth Lorenz speaks about the importance of intentional work of connecting our consciousness together telepathically and also "revisioning" the dream of life on this planet and thus restoring the morphogenetic field of consciousness on the planet.

"Research from Ramana Maharishi’s[*] Transcendental Meditation organization has calculated that it takes the square root of one-tenth of one percent of a population to change that population. That’s 8,000 people based on our current world population. This is a workable number. They don’t even have to be assembled at the same place at the same time. But they must have the same intention. Thus, we may be able to effect planetary healing with a two-step process: 1) the healing of disconnectedness and 2) revisioning."
[*Actually I am almost certain that the work researched was done by Maharishi Mahesh Yogi's organization and not Ramana Maharshi's, it is called the Maharishi effect]

If we simply recognize that we that through harnessing an intentional telepathic connection we can to restore our connection with eachother and with Nature.

I invite us to ask help from higher beings, and model our behavior by learning from "lower" beings and restore our awareness of the telepathic connections between us.
In the conversation at the Green Festival I continued to suggest to Paul that we humans can pattern our thought process of doing this work based on the way that the mycelium of mushrooms operates.

Paul's response to such thinking was one word - "myco-mimicry."
Naturally...he had thought of the same thing.
Posted by Greg at 10:13 PM 1 comment: Links to this post

The Secret - is about revisioning...

In a regular newsletter based on the book "The Collapsing Tower - The Birth Pangs of Post Ego Civilization" , Robert Lorenz, Phd writes about the importance of each of us to take responsibility for managing our own internal states as a way of managing the way the world process unfolds before us.

"Neville’s concept of “states” reflects this same idea. A state can be thought of as a kind of “mood” that controls how a person thinks, perceives, imagines and, ultimately, experiences life. In Immortal Man Neville says that these states exist as “fixtures”, and can be also thought of as different realities for the individuals locked into them. They comprise the multiplicity of psychic conditions of human existence. We can go from one state to another, but the state remains unchanged. Whether a person is good, bad, rich, poor, healthy or unhealthy, for example, is not an inherent characteristic of that person, but rather the state in which he (usually accidentally) finds himself. To paraphrase Neville, we are all God experiencing different human states. Thus, the criminal, victim, judge, and jury are all God carrying out the dictates of the state in which he finds himself. This, obviously, is a very liberating concept—and the ultimate liberation is the transcendence of all states."

"A significant step toward such liberation is learning how to navigate states—learning how to go from one to another. And this is one of the basic purposes of revisioning. A good way to practice this method involves revising events that occur during the course of the day. This is an effective method for preventing unwanted recurrences. For example, if you have a minor accident such as cutting your finger while washing a knife and you mentally revise the occurrence so that you almost cut your finger, what you’ve done is neutralized the morphogenetic field of the original experience. By doing this you invoke a reality in which the cut never happened. As I discussed in The Collapsing Tower, the morphogenetic field generated by an event increases the probability of a similar event occurring. Also, by revising the original event, you significantly accelerate the healing process. Thus, you don’t get locked into a state of accident-proneness."

"Practice with minor revisions gives you the confidence to take on greater ones. For example, you can eventually revise the experience of childhood abuse and move into a state based on the revised experience. In order to do this, however, you must firmly understand the veracity of multiple possible realities. We’re not stuck with whatever one we’re in—but in order to know this, you have to prove the validity of the idea for yourself."

"In the next Newsletter we’ll deal with the revisioning of the planetary eco-system. This will entail a large group effort involving a precise visualization of a healed planet."
Posted by Greg at 11:21 PM No comments: Links to this post