She states that she has not eaten food for a very long time.

Watch here and learn more!
Posted by Greg at 9:14 AM No comments: Links to this post 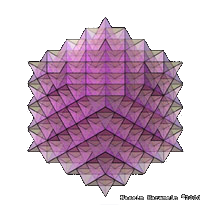 My friend Nassim Harimein will be releasing his new groundbreaking paper on "universal scaling laws" in NYC later on Tuesday April 22. His work shows that all organized matter is patterned around similar principles from the atom to large scale structures in astrophysics.

This is very important, as it points to the conclusion of Einsteins Unified Field Theory.

Simply put, in their own words, the Resonance Project Foundation website states:

"The paper reveals that a scaling law can be written to demonstrate that scales ranging from the universal structure we live in, to the atom and subatomic particles that make up our world, are able to be described under the conditions of a black hole. Some of the most important calculations are found between equations 4 and 18 which are simple equations describing the nuclei of the atom (the proton) interacting with the vacuum structure and obeying the conditions necessary to be described as a black hole.[click here for a great flash website on the basics of how black holes work]"

"Remarkably, the resulting circular velocity of such a system in Hertz yields the gamma ray emissions typically associated with atomic decay. This is a very exciting result, as in this case the atom is described in a completely classical way (or semi-classical) with very little quantum physics involved."

"This new description of our world marks a deeper understanding of our relationship to the scaling of event horizons from infinitely large to infinitely small, and although the data point for the biological resolution is not apparent on the graph, it is mentioned in the caption of Figure 2a. Here we show that the microtubules structure of the cellular level bisects the graph almost at its exact middle, placing biological systems, including us, as one of the event horizons connecting worlds."

"Later in the paper we demonstrate that a “spin horizon” can be described to both accommodate the galactic center black holes and the scale to the dynamics of the core of our Sun and its plasma structure. This implies that the central black holes of galaxies are the driving force producing the galactic disc and its halo, and that that very same force most likely produces the high energy physics we observe in our own Sun. This “spin horizon” now describes our world as being white hole / black hole structures at all scales, or what Haramein has coined the “white / black whole.” "

For you very technical - here is the detailed abstract from the paper.

"Abstract. From observational data and our theoretical analysis, we demonstrate that a scaling law can be written for all organized matter utilizing the Schwarzschild condition, describing cosmological to sub-atomic structures. Of interest are solutions involving torque and Coriolis effects in the field equations. Significant observations have led to theoretical and experimental advancement describing systems undergoing gravitational collapse, including vacuum interactions. The universality of this scaling law suggests an underlying polarizable structured vacuum of mini white holes/black holes. We briefly discuss the manner in which this structured vacuum can be described in terms of resolution of scale analogous to a fractal-like scaling as a means of renormalization at the Planck distance. Finally, we describe a new horizon we term the “spin horizon” which is defined as a result of a spacetime torque producing boundary conditions in a magnetohydrodynamic structure."
Posted by Greg at 2:59 AM No comments: Links to this post

A friend of mine sent me this video on myspace which feels very much like what I feel the whole experience of 2012 is all about. The collective experience of consciousness evolution and planetary transition has already begun.

If you're really wanting to know my thoughts on 2012, this video describes what 2012 is all about.

Image by artist Luke Brown.
Posted by Greg at 12:38 PM No comments: Links to this post 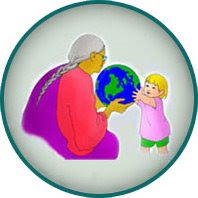 A long view...
history has entered the planetary phase of civilization
A global community...
humanity and Earth are bound in a common destiny
A fear...
looming crises portend a time of troubles
A choice...
we can shape the future by imagining what it could be
A vision...
a transition to a sustainable and just society is possible
A conviction...
a new global consciousness is ready to crystalize
Posted by Greg at 8:56 AM 1 comment: Links to this post

Loss of Ethnic Diversity "Ethnosphere" as tragic as multispecies extinction...

People being driven out of existence by forces beyond their own power, living lives of servitude and prostitution... all while their pristine habitats and peaceful ways of their lives systematically destroyed is the topic of a brilliant video talk by Anthropologist Wade Davis at a recent TED conference.

To truly discover the dimension and possibility of human potential we must embrace the cultural and ethnic diversity of indigenous experiences and languages.

We have deep roots going back to the dawn of the human mind in our multicultural diversity. These roots hold the keys to collective human survival, as we must embrace new ways of being and understanding our world which are long forgotten by our monochromatic perception in a multicolored reality.
Posted by Greg at 8:28 AM No comments: Links to this post