Amma's Message for the New Year! 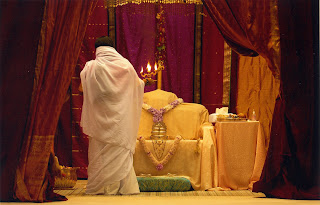 Amma's message for the new year:

"We are entering the New Year with hearts filled with hope," Amma said one hour into 2007. "Let us sincerely pray that this year—unlike in the past—we don't have to witness any more wars, innocent people being killed due to terrorism or natural disasters. Collective prayers can make some difference."

People from all around the world were visiting Amritapuri Ashram for the holidays, and as such Amma's darshan had gone from 10 a.m. until 30 minutes before the New Year. After Amma embraced the last person at 11:30, she began watching cultural performances put on by devotees and ashram residents. At midnight itself, Amma led everyone in the chanting of Om lokah samastah sukhino bhavantu [news].

In her talk, Amma reflected on how, on the eve of a New Year, it is everyone's habit to pray to God to fulfil their dreams. "It is good to cherish some dreams in regards to the future," Amma told her children. "But we also need put in our own efforts in order to fulfills those dreams."

Amma also spoke about how the New Year is a good time to take stock of our life and see if we are making progress or if we have strayed from our goal. Amma said. In fact, sometimes we have no clue as to where we are headed in life.

‘The worst poverty one can face in this world is a poverty of love," Amma said. "In a society where selfishness is on the rise, human beings have forgotten the language of sharing. This is the most horrible curse." Amma then asked everyone who was in the habit of smoking cigarettes, regularly buying expensive clothes and other such luxurious items to consider cutting back and donating the money they would save to help the poor.

Making the point that it is only due to mankind's greed that people are forced to starve in the world, Amma told an anecdote. It was about God making a New Year's resolution to put an end to world hunger. The story ended with God failing, because no one was willing to distribute the abundance of food he had created.

"When a New Year approaches, we always reflect on the year gone past—both the good events and the bad ones," Amma said. "As spiritual aspirants, we also need to introspect: What were our achievements? Where did we falter? We should not be egoistic about our achievements. We should draw inspiration from them. We should recognize our errors and then resolve to move ahead with more awareness."

Amma concluded her talk by requesting her devotees to spend at least some time every day helping others. "It could be speaking kind, consoling words to those who are sad or attentively listening to someone's problems," Amma said. "It could be protecting Mother Nature or providing any other form of help. In this way, through good thoughts and through good actions, we should create positive vibrations in the world. Surely the darkness of selfishness and hatred will disappear. May my children become a lamp filling the world with the light of peace and love."

Amma then sang three bhajans, beginning with "Hari Bol" and "Giridhari Gopala." Her final bhajan was in English. The song—"Everyone in the World"—was very fitting for a night associated with dreams for the future, as it presented Amma's dream.

There should be one day when there is no violence,
no one is injured, no one is harmed.

All people young and old should serve the poor
and needy, at least for one day, serve selflessly.